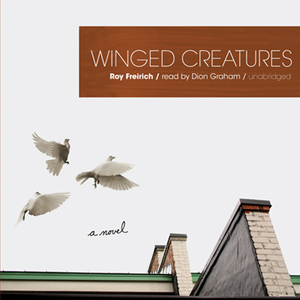 Audiobook Summary: Winged Creatures is the startling and intimate story of six survivors of a gun massacre. Hidden under a table, teenagers Anne and Jimmy watched as the gunman indiscriminately murdered Anne's father and others, then himself. Struggling to understand her father's death, Anne experiences a virulent religious conversion. Jimmy ceases to speak, protecting a secret that he and Anne share until it nearly destroys him and his fractured family. Charlie, a barely-wounded driving-school teacher, attempts to make his incredible luck work for him at the casino. Carla, the restaurant cashier, loses her ability to take care of herself and her infant son. Ron Abler, a psychologist, attempts to help the survivors, but is met with suspicion and little response. Dr. Laraby, an ER physician who failed to save two of the victims, turns to his wife as someone to "save". Driven by secret torments and dangerous compulsions, they each struggle to regain their trust in the ordinary world.