Who Controls the Internet: Illusions of a Borderless World (Unabridged) 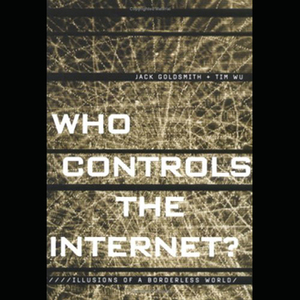 Audiobook Summary: Is the Internet erasing national borders? Who's really in control of what's happening on the Net--Internet engineers, rogue programmers, the United Nations, or powerful countries? In this provocative new book, Jack Goldsmith and Tim Wu tell the fascinating story of the Internet's challenge to governmental rule in the 1990s, and the ensuing battles with governments around the world. It's a book about the fate of one idea--that the Internet might liberate us forever from government, borders, and even our physical selves. We learn of Google's struggles with the French government and Yahoo's capitulation to the Chinese regime; of how the European Union sets privacy standards on the Net for the entire world; and of eBay's struggles with fraud and how it slowly learned to trust the FBI. In a decade of events, the original vision was uprooted, as governments time and time again asserted their power to direct the future of the Internet. The destiny of the Internet over the next decades, argue Goldsmith and Wu, will reflect the interests of powerful nations and the conflicts within and between them. Well written and filled with fascinating examples, this is a work that is bound to stir heated debate in the cyberspace community.