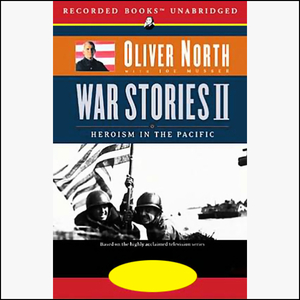 Audiobook Summary: New York Times best-selling author Oliver North, popular host of FOX News Channel's top-rated War Stories program, provided an insightful look at Operation Iraqi Freedom in the first hard-hitting book based on his show. Now in this second book, North shares the accomplishments of the heroic men who fought in the Pacific theater of World War II. Nowhere was the brutality of war more intense than in the Pacific. As American sailors, soldiers, and aviators fought savage battles that have become legendary (Midway, Guadalcanal, Tarawa, Peleliu, Iwo Jima, Okinawa) mainland Japan drew ever nearer. The American and Japanese veterans of those campaigns shared their stories with North, who presents them here in the soldiers' own words. More than a fascinating history of combat, War Stories II stands as a testament to the unmatched valor and bravery of an extraordinary generation.