Unveiling the Mysteries of the Last Days: Systematic Prophecy from Genesis to Revelation 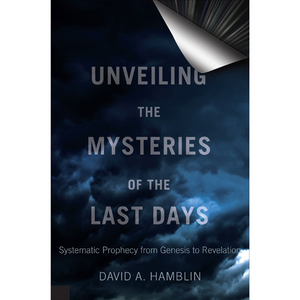 Written By: David A. Hamblin

Audiobook Summary: Since being written, the end-time prophecies of the Bible have been shrouded in mystery. Our world is now inundated with book after book on the subject of end-time interpretation. Often, the most important aspects of the Bible's prophecies are twisted or changed to fit the needs of a Hollywood movie. Expertly sifting through the modern fog covering these important prophecies, David Hamblin takes an exhaustive yet thoroughly readable approach to the study of the end times.Using the proven techniques of the scientific method, David put together a system of prophecy analysis that would allow for extremely complex theories to be tested against the many and varying passages of end times prophecy. Beginning with a solid faith in the Bible as the infallible Word of God, he now presents his findings in Unveiling the Mysteries of the Last Days . Never before has there been such a clear and concise presentation of God's timeline for the future, along with many passages that David admits we cannot yet understand. Written for the minister and layperson alike, it begins by explaining the church age and progresses through each of Revelation's seven phases, ending with new heaven and new earth. His approach details even subtle prophetic material, including Israel's future wealth, the world war it triggers, and Jesus's coronation.Don't be puzzled any longer by confusion on the subject of prophecy. Leave behind the many contradictory theories propagated by the misinformed. Follow along as Unveiling the Mysteries of the Last Days shows you, in detail, the tested, validated, and unified understanding of the Bible's prophecies.