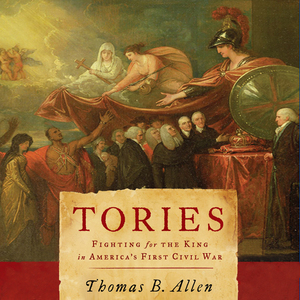 Written By: Thomas B. Allen

Audiobook Summary: A Sweeping, Dramatic History of the Americans Who Chose to Side with the British in the Revolution.... The American Revolution was not simply a battle between independence-minded colonists and the oppressive British. As Thomas B. Allen reminds us, it was also a savage and often deeply personal civil war, in which conflicting visions of America pitted neighbor against neighbor and Patriot against Tory on the battlefield, the village green, and even in church. In this outstanding and vital history, Allen tells the complete story of these other Americans, tracing their lives and experiences throughout the revolutionary period. New York City and Philadelphia were Tory strongholds through much of the war, and at times in the Carolinas and Georgia there were more trained and armed Tories than Redcoats. The Revolution also produced one of the greatest and least known migrations in Western history. More than 80,000 Tories left America, most of them relocating to Canada. John Adams once said that he feared there would never be a good history of the American Revolution because so many documents had left the country with the Tories. Based on documents in archives from Nova Scotia to London, Tories adds a fresh perspective to our knowledge of the Revolution and sheds an important new light on the little-known figures whose lives were forever changed when they remained faithful to their mother country.