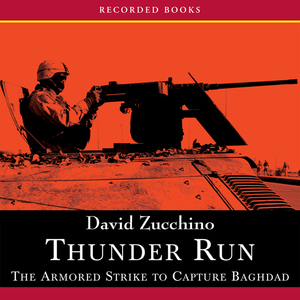 Audiobook Summary: Called "the best account of combat since Black Hawk Down " by Men's Journal , Thunder Run is a no-holds-barred look at the sweep of Baghdad, Iraq in 2003 by U.S. armed forces. One of the boldest gambles in modern military history, the surprise attack on Baghdad by three battalions of tanks and APCs and less than 1,000 men total was the single stroke that is credited for ending the Iraqi war. The three days of fierce fighting that followed the initial attack are captured in stunning detail by Richard M. Davidson's powerhouse narration.