They Made America: From the Steam Engine to the Search Engine: Two Centuries of Innovators 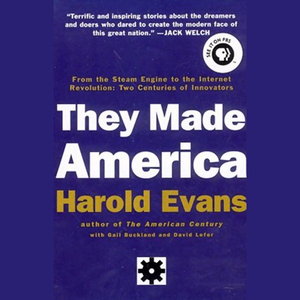 Written By: Harold Evans with Gail Buckland and David Lefer

Audiobook Summary:There has never been a history of America like Harold Evans's long-awaited They Made America . With the verve and cogency that made his American Century an acclaimed best seller, Evans tells the epic story of the men and women who made America over two centuries. The workshop revolutionaries who made our world have never had the attention afforded the political revolutionaries who founded this nation. But it has been these innovators, in small-town attics and on the Mississippi, in Silicon Valley and the wheat fields of Kansas, in a black woman's beauty parlor and a Dayton bicycle shop, who set America on a course to attain a standard of living unprecedented in the history of the world. The flourishing of America is the story of an inventive people with a mystic faith in technology, from the early settlers who devised windmills as a way of getting water on the Great Plains to the electronic whiz kids of the Internet. Innovation, practical inventiveness, is the main force behind America's preeminence. But there is more to this extraordinary history. Harold Evans traces how the innovators have time and time again proved to be democratizers, driven not by greed but by an ambition to be remembered. They translated the nation's political ideals into economic reality. Yet many of these heroic contributors have been lost to history. Who fought and fought to make banking available to the common people? Who opened the world of international air travel to the masses? Whose Internet triumph was based on egalitarian ideals? Who put cheap electricity into everyone's homes, and was pursued as a fugitive? Who gave everyman high-quality sound, and was driven to suicide? They Made America is eminently practical; but more than anything, it is history to inspire.