The Untold War: Inside the Hearts, Minds, and Souls of Our Soldiers (Unabridged) 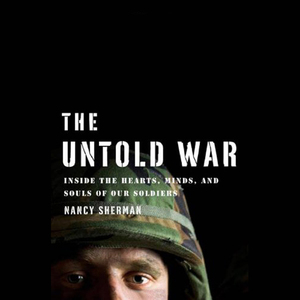 Audiobook Summary: A unique analysis of the moral weight of warfare today through the lenses of philosophy and psychology. Philosopher, ethicist, and psychoanalyst Nancy Sherman explores the psychological and moral burdens borne by soldiers. By illuminating the extent to which wars are fought internally as well as externally, this book expands the national discussion about war and the men and women who fight our nations' battles. With close-up looks at servicemen and women preparing for, experiencing, and returning home from war, Sherman probes the psyche of today's soldiers examining how they learn to kill and to leave the killing behind. Bringing to light the moral quandaries soldiers face: torture, the thin line between fighters and civilians, and the anguish of killing even in a just war. Sherman bares the souls of our soldiers and the emotional landscape of soldiering. At the heart of the book are interviews with soldiers, from the current wars in Iraq and Afghanistan, but also from Vietnam and World Wars I and II.