The Surge: Churches Catching the Wave of Christ's Love for the Nations (Unabridged) 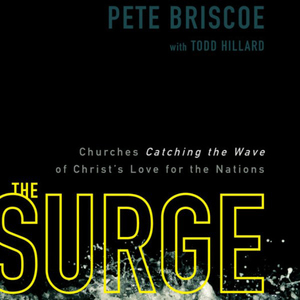 Audiobook Summary: When Jesus left the planet, he left a simple directive in his apprentice's ears: take me to the world, bring them into the family, and teach them to obey me... and don't worry I'll be with you every step of the way It focuses specifically on the awesome responsibility the blessed church of the West has in this regard to reach out globally. When Pete Briscoe arrived at Bent Tree they had 'prophecy conferences.' Desiring to focus on the part of the puzzle that we can actually do something about (the great commission) they immediately shifted the emphasis to a Mission Festival. At that time they were investing just $36,000 per year in world missions, and all but one of their missionaries was on American soil. They implemented Faith Promise giving, gave opportunities for mission partners to make compelling presentations, included mission moments in their worship services, brought in mission experts to speak at a mission festival, increased giving to over $1 million annually, gave 10% of expansion giving ($2.6 million) to the world church, adopted the world's largest unreached people group and have a desire to see a church planted in every one of the 200,000 villages in the region, and much more...This book is necessary because the American church has forgotten this simple truth: 'the church of Jesus Christ exists primarily for the benefit of its non-members.' The Seeker Movement helped to remind Evangelicals of the need to reach out to Seekers, but the model was a replica of the 'Bring to' Model of the Old Testament.