The Storm of Steel (Unabridged) 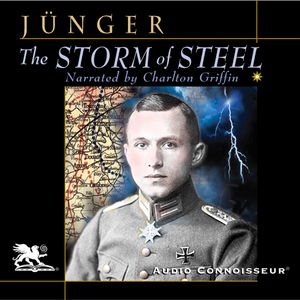 Audiobook Summary: This classic war memoir, first published in 1920, is based on the author's extensive diaries describing hard combat experienced on the Western Front during World War I. It has been greatly admired by people as diverse as Bertolt Brecht and Andre Gide, and from every part of the political spectrum. Hypnotic, thrilling, and magnificent, The Storm of Steel is perhaps the most fascinating description of modern warfare ever written. Out of the maelstrom of World War I emerge scenes which could have come straight from Dante's Inferno. Once you begin listening, you cannot stop. And it never relents: nerve pounding bombardments, agonizing gas attacks, sudden death that takes down a comrade next to you, and the occasional weeks of relief to restore the spirit when leave is granted to visit some attractive French village...all enveloped in the ghostly confusion of war. Ultimately, survival comes down to sheer luck. Junger displays no anger toward his enemies, and near the end he grows fatalistic and weary, even as he redoubles his resolve and maintains his patriotism. Junger's great book calmly conveys the mysterious attraction of war, the exhilaration of battle, and the undeniable glory of brave men. But he also describes the scenes of soldiers preparing for battle as though they were "some terrible, silent ceremonial that portends human sacrifice."