The Science of Superheroes (Unabridged) 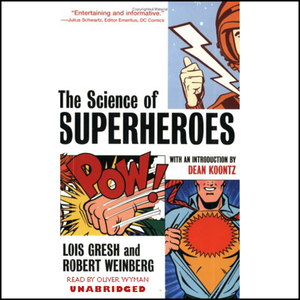 Written By: Lois Gresh and Robert Weinbergintroduction by Dean Koontz

Audiobook Summary:If the planet Krypton had a gravitational field strong enough to account for Superman's amazing strength, would it be possible to launch a rocket ship from the planet's surface? Assuming that the Flash could actually travel at the speed of light, would any villain ever stand a chance against him? Could evolution actually produce X-Men? The Science of Superheroes takes a lighthearted but clearheaded look at the real science behind some of the greatest superhero comic books of all time, including Spider-Man, Batman, the Fantastic Four, and many more. Each chapter presents the origin of one or more superheroes and asks intriguing questions that lead to fascinating discussions about the limits of science, the laws of nature, and the future of technology. If gamma rays can't turn a 128-pound weakling into the Incredible Hulk, what could? Are Spider-Man's powers really those of a spider? Could a person ever breathe water like a fish? From telepathy to teleportation, from cloning to cosmic rays, this vastly entertaining romp through the nexus of science and fantasy separates the possible from the plausible and the barely plausible from the utterly ridiculous. You'll discover the connection between black holes and green lanterns; what Galileo could have told Professor Pym about the stresses caused by shrinking and growing; and how many of Batman's "inventions" anticipated actual technological developments. You'll learn how comic book writers use "technobabble" to create seemingly credible explanations of improbable superpowers and bizarre events. The Science of Superheroes celebrates the ingenuity and imagination of the writers and artists behind the greatest superheroes, and offers helpful suggestions on how some characters' origin stories could be made more believable. It offers immensely enjoyable and informative listening for anyone who loves science, superheroes, or both. The Science of Superheroes is also available in print from Wiley.