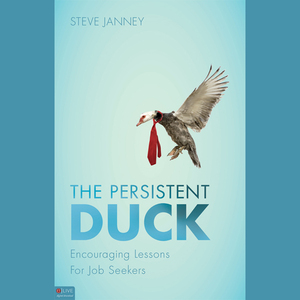 Audiobook Summary: Feeling discouraged about your current job situation? Is your self-esteem lacking as a result? Steve Janney tells you to be The Persistent Duck . In his inspiring book, Steve shares his own struggle with unemployment and how his faith in God helped him through it all, eventually leading him to counsel those struggling with their own job searches. He provides their success stories to encourage readers to maintain a positive attitude and be persistent, like a hungry duck. There's Charley, who, after a lengthy job search, received three job offers in one day! Or Terri, who was dissatisfied with her job as a hotel maid, so she pursued a different career path and through her tenacity became the assistant manager of a popular store. Similar stories give listeners who are underemployed or unemployed the confidence to follow their career dreams, because just as a duck never gives up, nor should they. Remember the duck! Steve Janney has assisted many people over the past 18 years to become employed or improve their present employment. He has presented motivational workshops for people in social-work careers. He was coauthor of the book How to Establish Your Own Private Practice for the mental health profession and copresented workshops nationally under the same title for several years for the American Personnel and Guidance Association.