The Nixon-Kennedy Debates: The Complete and Authentic Recordings of the Historic Debates (Unabridged) 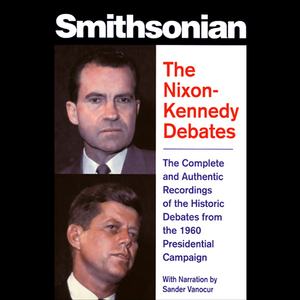 Audiobook Summary:In the fall of 1960, a series of debates between candidates for President, Republican Vice President Richard M. Nixon and Democratic Senator John F. Kennedy, would forever alter the landscape of political campaigning. The Nixon-Kennedy debates were the first presidential debates to be broadcast to a nationwide television and radio audience. Millions of Americans watched or listened to the historic confrontation. To this day, controversy still surrounds these meetings. Did the visual aspect of television interfere with the integrity of the candidate's words? Did the medium become more important than the message? This compilation contains the complete audio recordings of all four of the landmark debates complemented by narration by Sander Vanocur (one of the original panel of journalists during the first debate), enabling listeners to hear, word for word, history in the making and to draw his or her own conclusions about who won this face-off between two of America's most noted Presidents.