The New Road to Serfdom: A Letter of Warning to America (Unabridged) 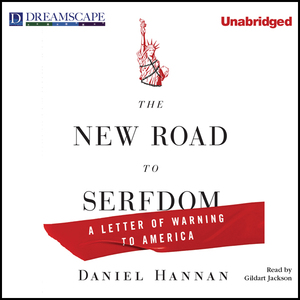 Audiobook Summary: In March 2009 British conservative Daniel Hannan became an overnight celebrity when he assailed Prime Minister Gordon Brown on the floor of the European parliament. The YouTube clip went viral, leading to whirlwind appearances on FOX and other conservative media outlets. A thoughtful and articulate spokesman for conservative ideas, Hannan is better versed in America's traditions and founding documents than many Americans are. In The New Road to Serfdom , Hannan argues forcefully and passionately that Americans must not allow Barack Obama to take us down the road to EU-style social democracy. Instead, he pleads with Americans not to abandon the founding principles that made their country a beacon of liberty for the rest of the world.