The Lost History of Christianity: The Thousand-Year Golden Age of the Church --- and How It Died (Unabridged) 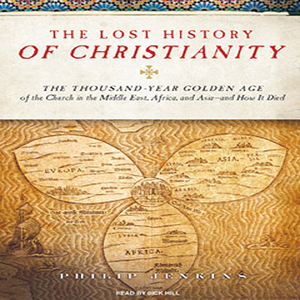 Audiobook Summary: The Lost History of Christianity will change how we understand Christian and world history. Leading religion scholar Philip Jenkins reveals a vast Christian world to the east of the Roman Empire and how the earliest, most influential churches of the East---those that had the closest link to Jesus and the early church---died. In this paradigm-shifting book, Jenkins recovers a lost history, showing how the center of Christianity for centuries used to be the Middle East, Asia, and Africa, extending as far as China. Without this lost history, we can't understand Islam or the Middle East, especially Iran, Iraq, and Syria. Complete with maps, statistics, and fascinating stories and characters that no one in the media or the general public has ever heard of, The Lost History of Christianity will immerse the listener in a lost world that was once the heart of Christianity.