The Lions of Iwo Jima: The Story of Combat Team 28 and the Bloodiest Battle in Marine Corps History (Unabridged) 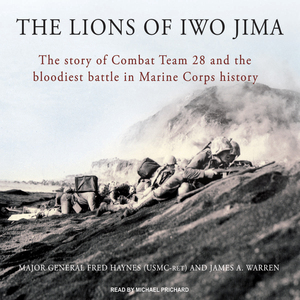 Audiobook Summary: It was the bloodiest battle in Marine Corps history, claiming a third of all marines killed in World War II. The relentless fighting on Iwo Jima lasted for 36 days, but most of us only know the iconic photo of five soldiers raising the American flag on Mount Surabachi. For Fred Haynes, a young captain in Combat Team 28, Surabachi was one marker in a ferocious blood-letting against an enemy of 22,000 warriors who were dug into caves and tunnels. The stories told here for the first time will seem too cruel, too heartbreaking, even too fantastic to be believed. As one veteran remarked, "Each day we learned a new way to die." By the time Haynes's unit had broken through the main Japanese resistance, 75 percent of the three assault battalions---the frontline fighters who charged enemy positions---were gone. Many of the exhausted survivors were shattered. In five weeks, Combat Team 28 had advanced 5,600 yards, closed 2,088 caves, and lost 5,885 lives. The Lions of Iwo Jima helps answer the essential questions: who were these men, how were they trained, and what accounts for their extraordinary performance in battle?