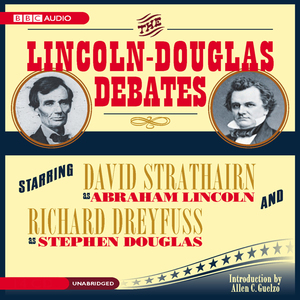 Audiobook Summary:This Star-Studded New Recording Brings to Life a History Changing Political Battle! The Lincoln-Douglas Debates made history and changed its course through seven legendary match-ups between Abraham Lincoln and Stephen Douglas during the 1858 Illinois senatorial race. Although he lost the election, Lincoln's gift for oratory and his anti-slavery stance made him a nationally known figure, and led to his election to the presidency in 1860. Never before presented in audio, these debates and great statesmen are brought to life by narrators Richard Dreyfuss (Douglas) and David Strathairn (Lincoln). Perfectly timed for the Lincoln Bincentennial celebrations, The Lincoln-Douglas Debates provide a soundtrack to a nation discovering its better self.