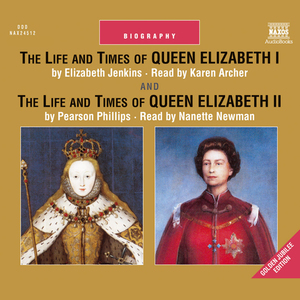 Audiobook Summary:The two reigns - both unusually long - could scarcely have been more different. Queen Elizabeth I brought a much needed (and appreciated) stability to England at a key moment in the history of the nation. The steady hand of the Virgin Queen - supported by Lord Burleigh, her clear-sighted chancellor - ushered in a golden age after a time of considerable religious and political upheaval. Elizabeth Jenkins offers a personal portrait of a sovereign who was very much a woman, as well as a queen. Queen Elizabeth II has, by contrast, been the constitutional monarch par excellence - a figurehead guiding the concept of monarchy through difficult times, both national and personal. Her reign has seen major changes in the lifestyle and expectations of peoples and nations and she also proved to be a steady, clear personality on the throne. Pearson Phillips, in his sympathetic portrait, shows that even when her family has been rocked by scandals, Elizabeth II has maintained a quiet dignity.