The Greatest Threat: Iraq, Weapons of Mass Destruction, and the Crisis of Global Security (Unabridged) 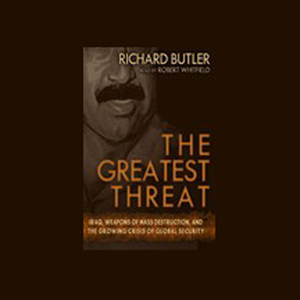 Audiobook Summary:Civilization may face no greater enemy than Saddam Hussein, and yet, as Richard Butler makes clear in his gripping and terrifying The Greatest Threat, the major powers allowed Saddam to face them down. Richard Butler was not the type to surrender to the Iraqis, not when he knew what was at stake. As the head of UNSCOM, the special United Nations Commission that was supposed to regularly inspect Iraq for weapons violations, Butler was the world's "sheriff" - the one person on the ground with the authority to shut the Iraqis down if he caught them cheating. But that authority was undermined behind his back. Kofi Annan, in the name of diplomacy, agreed to Hussein's outrageous demands and then claimed victory. Russia's Foreign Minister took secret payoffs from the Iraqis in exchange for his support. The French, eager to do business with the dictator, undercut American efforts to force Hussein to comply. Butler found himself the target of a major Iraqi and Russian propaganda campaign and, ultimately, alone. The Greatest Threat tells the inside story of the UN's failed attempt to stop Saddam and explains the terrible cost of that failure. A disturbing and important work, The Greatest Threat is essential listening for anyone who cares about the fate of the globe.