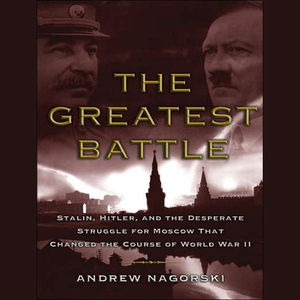 Audiobook Summary:Based on previously secret documents and eyewitness testimony, this is the shocking account of the most massive and deadliest battle of World War II, which ended in Hitler's defeat and changed the course of the war. Andrew Nagorski, Newsweek 's former Moscow bureau chief, reveals that 2.5 million of the battle's 7 million troops were killed, taken prisoner, or severely wounded. Stalin and Hitler squandered the lives of their own soldiers by second-guessing their generals. And, while Stalin's army was barely armed, Hitler's soldiers had no winter clothing in the Russian winter. Historically, this was the first time the German blitzkrieg was halted in Europe, shattering Hitler's dream of a swift victory over the Soviet Union. And, although America was not yet in the war, President Roosevelt realized the importance of supporting the Russian war effort. This was the beginning of the Allied wartime alliance and Stalin's push for a postwar empire, which ended in the cold war. Because Stalin suppressed records of his near-fatal mistakes in this battle, its story has never been fully told. Now, Nagorski has studied recently declassified documents from Soviet archives and includes interviews with many survivors, including the son of the man in charge of removing Lenin's body from the besieged city, to provide the fullest view yet of this key battle.