The Great American Stick Up: Greedy Bankers and the Politicians Who Love Them (Unabridged) 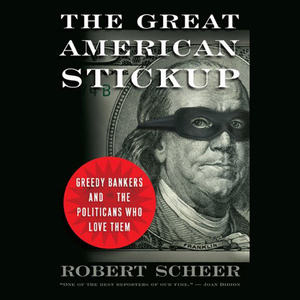 Audiobook Summary: In The Great American Stickup , celebrated journalist Robert Scheer uncovers the hidden story behind one of the greatest financial crimes of our time: the Wall Street financial crash of 2008 and the consequent global recession. Instead of going where other journalists have gone in search of this story the board rooms and trading floors of the big Wall Street firms Scheer goes back to Washington, D.C., a veritable crime scene, beginning in the 1980s, where the captains of the finance industry, their lobbyists and allies among leading politicians destroyed an American regulatory system that had been functioning effectively since the era of the New Deal.