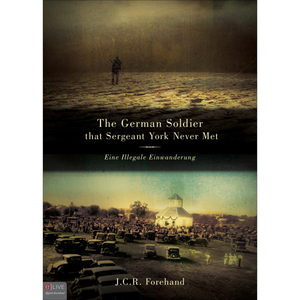 Audiobook Summary: Sergeant Alvin C. York has been credited with capturing 132 Germans during WWI, but did he really? Is it possible that one Johann Peter Jung could have escaped? It is possible that there's a German soldier out there that Sergeant York never met? Johann Peter Jung was a young boy of 18 when he was drafted into the German army, and he happened to be stationed with the First Battalion, 120th Wurttemberg Landwehr Regiment captured by then Corporal York. He spoke no English, but in the heat of battle, with artillery exploding nearby, he managed to deceive York and sought refuge in the most unlikely of places - behind enemy lines. Join author J. C. R. Forehand as he leads you through the twisting tale of Johann's escape from Sergeant York's prisoners of war. Follow Johann as he is medically discharged from the American Army, voyages to an isolated German-speaking Texan town in the roaring 1920s, and eventually shares his secret. Meet The German Soldier That Sergeant York Never Met in this historical novel set in the trenches of no man's land.