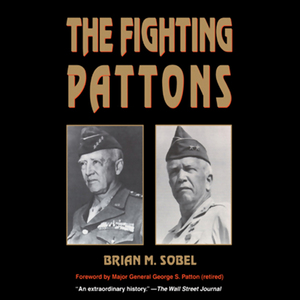 Audiobook Summary:Brian Sobel's The Fighting Pattons is an extraordinary history of one American family's love of war. It includes the exploits of Hugh Mercer, a famous Revolutionary War general who married in the Patton line, and Colonel Waller Tazewell Patton, who was mortally wounded at Gettysburg while taking part in Pickett's Charge. But the primary focus is on the careers of the 20th-century Pattons: World War II legend General George S. Patton, Jr., and his lesser-known namesake and son, Major General George S. Patton, who fought in Korea and Vietnam and now lives quietly on the family farm in Hamilton, Massachusetts. The life and thoughts of Major General Patton - an interesting figure in his own right - give us insights into his more famous father that can only come from a son forced to live and work in a great man's shadow.