The ESP Enigma: The Scientific Case for Psychic Phenomena (Unabridged) 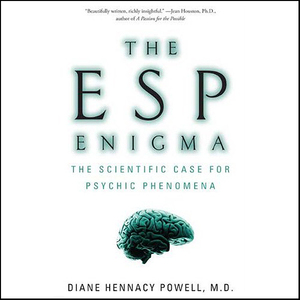 Audiobook Summary:Although much is now known about the brain, relatively little has been determined about where consciousness comes from: What is the source of the "I" in our internal monologue? How does something as nonmaterial as consciousness arise from something material like the brain? Dr. Diane Powell, a Johns Hopkins-trained neuroscientist, has brilliantly reassessed the meaning and nature of consciousness by exploring research on the workings of psychic phenomena. Over the past few decades, several well-designed and rigorously supervised experiments have documented the existence of telepathic interconnection, clairvoyance, precognition, psychokinesis, and out-of-body experiences. Mainstream science has largely ignored these data, because they all defy the traditional model of consciousness as being solely the product of brain chemistry. Building from these experiments, Powell constructs a new theory of consciousness. Integrating concepts from physics, neuroscience, and other disciplines, she offers an insightful and intriguing explanation of ESP, provocatively claiming that the existence of psychic abilities expands our understanding and appreciation of consciousness. Psychic abilities are also consistent with findings in modern physics: For example, psychokinesis implies that consciousness is a type of force field, while precognition suggests that the past, present, and future exist concurrently. Eye-opening in its conclusions and exciting in its implications, The ESP Enigma will challenge your preconceived notions and expand your mind.