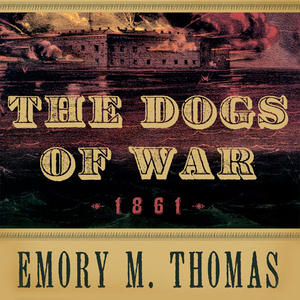 Audiobook Summary: In 1861, Americans thought that the war looming on their horizon would be brief. None foresaw that they were embarking on our nation's worst calamity, a four-year bloodbath that cost the lives of more than half a million people. But as eminent Civil War historian Emory Thomas points out in this stimulating and provocative book, once the dogs of war are unleashed, it is almost impossible to rein them in. In The Dogs of War , Thomas highlights the delusions that dominated each side's thinking. Lincoln believed that most Southerners loved the Union and would be dragged unwillingly into secession by the planter class. Jefferson Davis could not quite believe that Northern resolve would survive the first battle. Once the Yankees witnessed Southern determination, he hoped, they would acknowledge Confederate independence. These two leaders, in turn, reflected widely held myths. Thomas weaves his exploration of these misconceptions into a tense narrative of the months leading up to the war, from the "Great Secession Winter" to a fast-paced account of the Fort Sumter crisis in 1861. Emory M. Thomas's books demonstrate a breathtaking range of major Civil War scholarship, from The Confederacy as a Revolutionary Experience and the landmark The Confederate Nation , to definitive biographies of Robert E. Lee and J.E.B. Stuart. In The Dogs of War , he draws upon his lifetime of study to offer a new perspective on the outbreak of our national Iliad .