The Curfew Tolls the Knell of Parting Day: Poems by Mr. Gray, including 'Elegy Written in a Country Churchyard' (Unabridged) 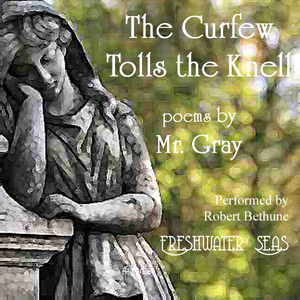 Audiobook Summary: Thomas Gray is world famous as the author of "Gray's Elegy", more properly known as "Elegy Written in a Country Churchyard". He did not write very much, but he did write more than just his most famous poem. This collection is a recording of the 1768 Dodsley edition, the primary publication of his poetry that he published during his lifetime. It consists of only 10 poems, written mostly during the 1740s. Although he continued to write after 1768, it does seem as though he regarded this collection as the definitive body of the work he most valued. These poems are remarkably varied. From the solemn philosophy of the "Elegy", he moves to dramatic portrayals of history and even some rather humorous verse, though always with a moral tone. I invite the reader to enjoy this small collection of Gray, in which one can get a sense of the man behind the verse, the man who wrote the immortal lines of the "Elegy".