The Bravest Man: The Story of Richard O'Kane & U.S. Submariners in the Pacific War (Unabridged) 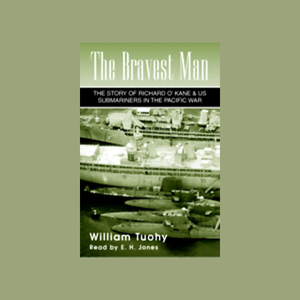 Audiobook Summary:Pulitzer Prize-winning journalist William Tuohy follows Richard O'Kane, America's undersea ace of aces, and a few fearless submariners, during the U.S. submarine war in the Pacific. This grueling battle saw 10 million tons of Japanese shipping sunk by U.S. submarines, but the cost to the U.S. Navy was one in five of its boats, the highest casualty rate of the U.S. armed services. Amid internal threats and scandals, O'Kane participated in the most dramatic war patrols of the Pacific War, and rescued the largest number of carrier aviators from under the guns of the Japanese. Yet at the end of its fifth successful patrol, his ship was sunk by its own torpedo. Tuohy's portrait provides an insider's view of the successes and fractures that accompany wartime stresses.