The Best of Fantasy and Science Fiction Magazine 2002 (Unabridged) 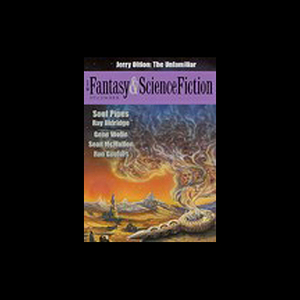 Audiobook Summary: The Magazine of Fantasy & Science Fiction has submitted ten of its best of 2002. Although the collection is a veritable cornucopia of styles and subjects, each story is somehow notable for its compassion and humanity. In Harlan Ellison's "Never Send to Know for Whom the Lettuce Wilts" meet the alien "unie" whose job it is to conquer Earth in some very peculiar ways. Bruce Sterling's "In Paradise" is a romantic adventure initiated by security screenings. The talent referred to in Albert F. Cowdrey's "The Boy's Got Talent" is enough to get any young man into serious trouble. "Creation" by Jeffrey Ford addresses the relationship of men to gods in a uniquely down home manner. If you've ever felt a shiver down your spine, as if you were being watched, watch out for the late Damon Knight's "Watching Matthew," where a whole life spreads out in fast forward. Robert Sheckley's "Shoes" is a noirish thriller that gives new meaning to the phrase "down at the heels." In "Presence," Maureen McHugh explores the implications of an experimental and unsettling treatment for Alzheimer's with compassion and courage. "Our Friend Electricity" by Ron Wolfe is a dizzying Coney Island roller coaster ride in time and space. Esther M. Friesner's latest tour de force, "Just Another Cowboy," is set in Texas, and suggests an interesting possibility for the source of certain classical myths. And last, in another mythically alternative reality, M. Rickert's "Leda" tries to adjust to the emotional and physical consequences of a rape.