The Age of Louis XIV (Unabridged) 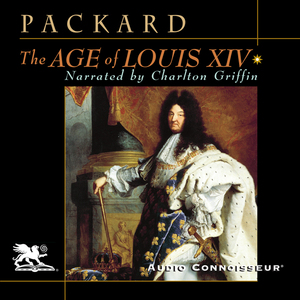 Audiobook Summary:The seventeenth century was one of the most fascinating and seminal periods in European history, particularly with regard to France. For it was here in France that the fruits of the earlier Renaissance were to be most brilliantly realized. Although the path of "greatness" for Louis XIV was prepared for him by men like Richelieu, Mazarin, Colbert, Turenne, and Louvois, it was during his reign that French preeminence in all facets of civilization emerged. In diplomacy, military science, art, architecture, literature, fashion, music, gastronomy, philosophy, physics, mathematics, engineering, and many other fields of endeavor, France stood at the pinnacle of human achievement. She was to remain there until the time of Napoleon. How did this hegemony come about? Laurence Bradford Packard, an eminent historian and scholar, traces the origins of absolute monarchy and tells us how the political evolution of inherited kingship came to be what it was by the time of Louis XIV. He explains the marvelous diplomatic machinery backed by military might that made France the most feared nation in Europe for almost 200 years. And he discusses the various intellectual controversies of the day which were to produce some of the greatest minds in Europe. There has never been a period which produced so many masters of language: Voltaire, Moliere, Racine, Corneille, Pascal, Bayle, Rochefoucauld, La Fontaine, Bossuet, and many others. And of course, there were Milton, Hobbes, and Locke in England. Packard gives them all their due and goes on to explore the other arts, as well. The book ends with an appraisal of the amazing progress Europeans, and especially the French, made in the scientific fields. The names are legendary: Descartes, Newton, Boyle, Leeuwenhoek, Leibnitz, and others. It was a titanic period, and hovering above them all was the man who symbolized the power and majesty of the absolute monarchy...Louix XIV.