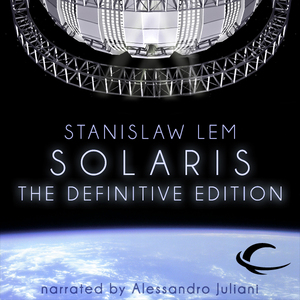 Audiobook Summary: At last, one of the world's greatest works of science fiction is available - just as author Stanislaw Lem intended it. To mark the 50th anniversary of the publication of Solaris , Audible, in cooperation with the Lem Estate, has commissioned a brand-new translation - complete for the first time, and the first ever directly from the original Polish to English. Beautifully narrated by Alessandro Juliani ( Battlestar Galactica ), Lem's provocative novel comes alive for a new generation. In Solaris , Kris Kelvin arrives on an orbiting research station to study the remarkable ocean that covers the planet's surface. But his fellow scientists appear to be losing their grip on reality, plagued by physical manifestations of their repressed memories. When Kelvin's long-dead wife suddenly reappears, he is forced to confront the pain of his past - while living a future that never was. Can Kelvin unlock the mystery of Solaris? Does he even want to?