Roughneck Nine-One: The Extraordinary Story of a Special Forces A-Team at War (Unabridged) 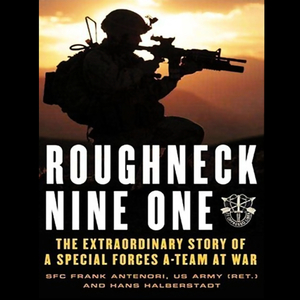 Audiobook Summary:On April 6, 2003, 26 Green Berets, including those of Sergeant First Class Frank Antenori's Special Forces A-Team (call sign Roughneck Nine One), fought a vastly superior force at a remote crossroads near the village of Debecka, Iraq. The enemy unit had battle tanks and 150 well-trained, well-equipped, and well-commanded soldiers. The Green Berets stopped the enemy advance, then fought them until only a handful of Iraqi survivors finally fled the battlefield. In the process, the Nine One encountered hordes of members of the news media. And at the peak of the fight, a US Navy F-14 dropped a 500-pound bomb into the middle of a group of supporting Kurdish Peshmerga fighters, killing and wounding dozens. Roughneck Nine One is the never-before-told, unsanitized story of the fight for the crossroads at Debecka, and a unique inside look at a Special Forces A-team as it recruits and organizes, trains for combat, and eventually fights a battle against a huge opposing force.