Road to Baghdad: Behind Enemy Lines, The Adventures of an American Soldier in the Gulf War 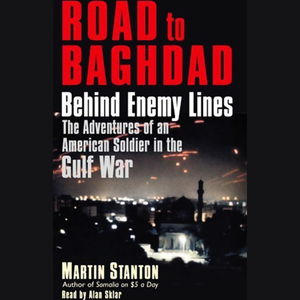 Audiobook Summary:In 1990, U.S. Army Major Martin Stanton was a military advisor stationed in Saudi Arabia. Encouraged by the Army to broaden his cultural horizons, and assured by the U.S. embassy that Kuwait was perfectly safe, Stanton took off for a long weekend there. Roused by gunshots his first night in Kuwait City, Stanton looked out the window and discovered he was in the middle of a full-scale invasion. The Gulf War had begun, and the U.S. had an army officer sitting in the front row. Yet Stanton's prime "position" was short-lived. Rounded up by the enemy, he would spend the next four months in Iraq as one of Saddam's "guests", forced along to strategic locations as a roving human shield. Taking notes and looking for ways to smuggle out information, Stanton made the most of his captivity. Fortunately he was rescued, just in time to fight in the ground battle to liberate Kuwait. With the same insight and intelligence evident in his first book, Somalia on $5 a Day , Martin Stanton has produced another fascinating account that offers readers a rare glimpse of a different time in the Middle East, when Saddam Hussein was at the height of his power and ambition, and when the U.S. was simply trying to repel an invader.