Raising the Dead: A Doctor Encounters the Miraculous (Unabridged) 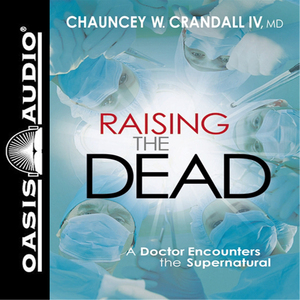 Audiobook Summary: Renowned cardiologist Dr. Chauncey Crandall IV was a Christian who kept his faith and his profession mostly separate when he first encountered a man named Jeff Markin. Jeff had collapsed during a massive heart attack at the entrance of the emergency room, and forty-three minutes later he was dead. He had been shocked repeatedly several times with defibrillator paddles but his heartbeat had flatlined. As a nurse prepared Jeff's body for the morgue, Dr. Crandall obeyed a compelling yet mysterious urge to pray for the man even though he had already been declared dead. He asked the ER physician to shock the patient one more time. The physician reluctantly obeyed and a perfect heartbeat appeared on the monitor. Jeff Markin, now a Christian, is alive and healthy today. And Dr. Crandall, who has experienced worldwide recognition because of this miracle and others, no longer keeps his faith and profession separate. He has become a man with a thriving healing ministry through prayer as well as a world-class medical practice. Dr. Crandall cares deeply not only about his patients' physical condition, but also about their spiritual condition. He speaks nationally and internationally about his work with the suffering and the awe-inspiring ways God performs dramatic healings even in the twenty-first century.