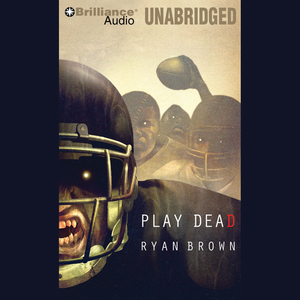 Audiobook Summary: For the first time in Killington High School history, the Jackrabbits football team is one win away from the district championship game where they will take on their most vicious rival, the Elmwood Heights Badgers. But on game day, bad-boy star quarterback Cole Logan is brutally attacked by three masked men. With the stakes so high, Cole is determined to play despite his injuries, but his coach refuses to allow it. That night on the way to the game the Jackrabbits' bus crashes, killing all of Coles' teammates. When he learns the steroid-crazed Badgers are responsible, he is bent on payback and turns to a mysterious fan skilled in black magic to resurrect the team. But even in the spirit world there are hitches. The Jackrabbits are brought back to life, but unless they win the final game against their murderous rival, the team is destined for hell. In a desperate race against time, with only his coach's clever daughter to assist him, Cole must lead his zombie team to victory...or risk their eternal damnation and violent consequences for everyone in town. With a fast-paced plot that twists, turns, and shocks, vibrant characters who pack an emotional punch, and plenty of dark humor, Play Dead is a compulsively readable thriller that reflects the national obsession with football and the growing fascination with the undead.