My Tank is Fight!: Deranged Inventions of WWII (Unabridged) 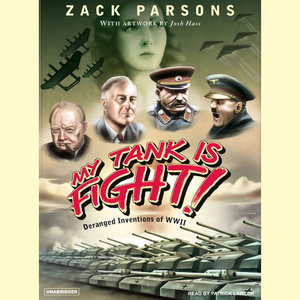 Audiobook Summary: My Tank Is Fight! contains a humorous and exciting examination of 20 real inventions from World War II that never saw the light of day. Each entry includes full technical details, a complete development history, in-depth analysis, and a riveting fictionalized account of the invention's success or failure on the battlefield. Dive under the Atlantic in the turreted U-Cruiser, or rule its surface from an aircraft carrier made out of ice. Shred bomber formations in a high-performance flying wing fighter and then rocket to your untimely end from the cockpit of your very own suicide missile. We've got a pair of German armored land vehicles for you that are so large they had to be powered by naval engines! My Tank Is Fight! delivers the thrilling action of the Second World War - as it might have been - with a touch of humor and a lack of class.