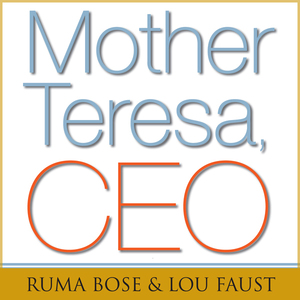 Audiobook Summary: When most people think of Mother Teresa, they think of a saint - a spiritual hero of extraordinary humanitarian accomplishments, a Nobel Peace Prize winner. But Mother Teresa was also the leader of one of the world's largest and most successful organizations: the Missionaries of Charity. Since founding it in 1948, she raised millions of dollars and, with over a million volunteers in more than 100 countries, it remains one of the most recognized brands in the world. How did one nun who never received any formal education in business build such an impressive global organization? Frank, realistic, and firmly grounded in practicality, Mother Teresa's leadership style helped to inspire and organize people across the world. This book shares 10 essential leadership principles drawn from Mother Teresa's example and applies them to today's business world. Authors Ruma Bose, an entrepreneur who volunteered with Mother Teresa, and Lou Faust, a leading business expert, are the first to examine her in this light - as a leader whose management style and dedication to a singular vision led to one of the world's most unlikely success stories. Mother Teresa may have been a saint, but her spectacular success was not a product of divine providence. Her genius was in the simplicity of her vision and her dedication to its implementation. It was in the way she treated her people, refusing to distance herself from the everyday work of a typical sister of the Missionaries of Charity. It was in how she handled tough choices, like accepting donations from brutal Haitian dictator Francois "Papa Doc" Duvalier. These were the principles that made her the great leader of a global organization, and they can be applied by anyone in any organization - no sainthood required.