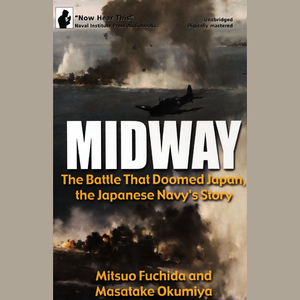 Audiobook Summary:This landmark study was first published in English by the Naval Institute in 1955. Widely acknowledged for its valuable Japanese insights into the battle that turned the tide of war in the Pacific, the book has made a great impact on American readers over the years. Two Japanese naval aviators who participated in the operation provide an unsparing analysis of what caused Japan's staggering defeat. Mitsuo Fuchida, who led the first air strike on Pearl Harbor, commanded the Akagi carrier air group and later made a study of the battle at the Japanese Naval War College. Masatake Okumiya, one of Japan's first dive-bomber pilots, was aboard the light carrier Ryujo and later served as a staff officer in a carrier division. Armed with knowledge of top-secret documents destroyed by the Japanese and access to private papers, they show the operation to be ill-conceived and poorly planned and executed, and fault their flag officers for lacking initiative, leadership, and clear thinking. With an introduction by an author known for his study of the battle from the American perspective, the work continues to make a significant contribution to World War II literature.