Medal of Honor: Profiles of America's Military Heroes from the Civil War to the Present 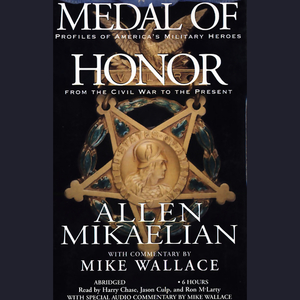 Audiobook Summary:In 1863, President Lincoln first awarded the Congressional Medal of Honor, which was created to boost morale among the Union rank and file. In the decades that followed, the award evolved to take on an almost sacred quality. Today, it remains the highest U.S. military decoration. Of the millions of Americans who have gone into combat in the past century, fewer than 1,300 have earned the Medal of Honor, and many of those were awarded for actions they did not survive. Their courageous and selfless feats in battle are barely conceivable. Medal of Honor portrays several recipients of the award, and examines what drove them to go so far above and beyond the call of duty. Among the stories are an accurate account of the life of the only woman ever to receive the medal, and of a soldier from the legendary WWII Japanese-American 442nd, who went on to earn the medal in the Korean War. This audio program tells not only of astonishing military actions but also, significantly, of the recipients' lives before and after their wartime experiences. In his moving commentary, acclaimed 60 Minutes reporter Mike Wallace places these actions in historical context and relates his own personal experiences in WWII and as a journalist covering recent wars. He also meditates on the meaning of courage and shows what we can all learn from these extraordinary individuals.