Masters of Deception: The Gang That Ruled Cyberspace (Unabridged) 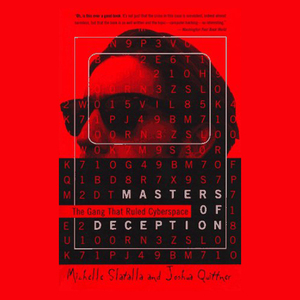 Audiobook Summary: From the bedroom terminals of teenagers isolated from their peers by their hyperactive intellects, to the nerve center of a nationwide long-distance phone company infiltrated by a hacker's hand, Masters of Deception offers an unprecedented tour of the murkiest reaches of the electronic frontier and a trenchant, blow-by-blow chronicle of the most notorious gang war in cyberspace. In 1989, Paul Stira and Eli Ladopoulos, two teenage hackers from Queens, New York, made some exploratory forays into local phone-company computers and discovered a domain far more mysterious and appealing than any they had ever seen. To unravel the mysteries, they contacted Phiber Optik (aka Mark Abene) - a member of an infamous gang of crack hackers called the Legion of Doom. Phiber Optik was legendary throughout cyberspace for his wealth of hard-won knowledge about the phone system. When he was satisfied that Stira and Ladopoulos weren't a couple of lamers, the three kids arranged a meeting of the minds in Ladopoulos's bedroom. When Phiber Optik got kicked out of LOD after a tiff with its leader, Erik Bloodaxe (aka Chris Goggans), the New York kids formed a rival gang called Masters of Deception. MOD soon matched LOD's notoriety, gaining a reputation for downloading confidential credit histories (including Geraldo Rivera's, David Duke's, and a rival hacker's mom's), breaking into private computer files, and rewiring phone lines. All the while, federal agents were secretly monitoring this highly illegal battle royal and closing in for the kill. Slatalla and Quittner, who have followed this case for five years, lead us down the darkest alleys of cyberspace and up to the front lines of the raging battle over just who will control the web that already connects everyone to everybody else. They offer an unparalleled hacker's-eye view of the inner life of hackers, a heady realm where order and chaos hold equal sway.