Lost Triumph: Lee's Real Plan at Gettysburg And Why It Failed (Unabridged) 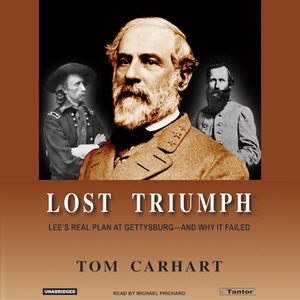 Audiobook Summary:A fascinating narrative, and a bold new thesis in the study of the Civil War, that suggests Robert E. Lee had a heretofore undiscovered strategy at Gettysburg that, if successful, could have crushed the Union forces and changed the outcome of the war. The Battle of Gettysburg is the pivotal moment when the Union forces repelled perhaps America's greatest commander, the brilliant Robert E. Lee, who had already thrashed a long line of Federal opponents, just as he was poised at the back door of Washington, D.C. It is the moment in which the fortunes of Lee, Lincoln, the Confederacy, and the Union hung precariously in the balance. Conventional wisdom has held to date, almost without exception, that on the third day of the battle, Lee made one profoundly wrong decision. But how do we reconcile Lee the high-risk warrior with Lee the general who launched "Pickett's Charge", employing only a fifth of his total forces, across an open field, up a hill, against the heart of the Union defenses? Most history books have reported that Lee just had one very bad day. But there is much more to the story, which Tom Carhart addresses for the first time. With meticulous detail and startling clarity, Carhart revisits the historic battles Lee taught at West Point and believed were the essential lessons in the art of war: the victories of Napoleon at Austerlitz, Frederick the Great at Leuthen, and Hannibal at Cannae, and reveals what they can tell us about Lee's real strategy. What Carhart finds will thrill all students of history: Lee's plan for an electrifying rear assault by Jeb Stuart that, combined with the frontal assault, could have broken the Union forces in half. Only in the final hours of the battle was the attack reversed through the daring of an unproven young general: George Armstrong Custer.