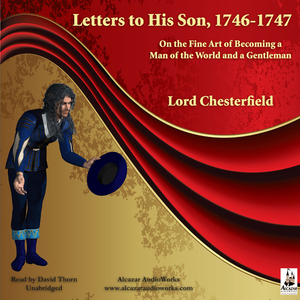 Audiobook Summary: The first set of an extraordinary collection of 10 sets of personal letters written by Lord Chesterfield to his illegitimate son, young Philip Stanhope, then living abroad with his tutor to further his education. His Lordship, later secretary of state, hoped that his son would follow in his footsetps and took endless pains to instruct him on the essential and finer beharioral traits of a the aristocracy, which might lead him to such dizzying heights. All was in vain when Stanhope suddenly died at 36, leaving a penniless widow and two boys - until then, unheard of by his lordship.