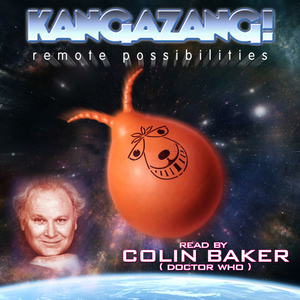 Audiobook Summary: Two men. Saving the universe. On space hoppers. Kangazang! is an intergalactic space comedy read by Doctor Who's Colin Baker (with additional vocals by Claire Cage and Terry Cooper). Earthling Jeff Spooner accepts an offer to explore the galaxy with his alien barber friend, Ray Scump. The pair are thrown into a non-stop adventure as they embark on a quest to find the fabled Universal Remote - avoiding danger, doom, and embarrassing situations as they go. Aided by two badly programmed robots and an army of warrior space hoppers, our heroes duck, dive, and try to dodge the biggest threats in the galaxy: Overlord Kelvin (evil ruler of the Skragg people), The Emo People (a terminally dreary race of religious zealots), Queen Shelley (a bald, cannibalistic Amazon with a score to settle). Kangazang! is an enhanced audiobook - containing dramatic music and sound effects, making it a rich and immersive experience. Colin Baker - well known for creating the most flamboyant and colourful of all the Doctors - portrays the zany Kangazang universe perfectly, shifting effortlessly from one character to another. This audio edition of the 2008 novel is a wacky adventure that will transport you across the galaxy - meeting weird aliens, visiting bizarre planets, and facing the strangest dangers in the universe!