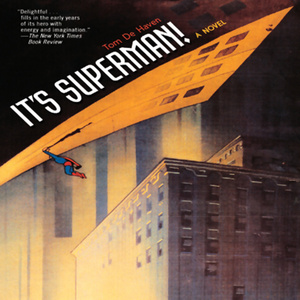 Audiobook Summary:Acclaimed novelist Tom De Haven recreates the early years of the Man of Steel - the world's most popular and enduring superhero. Opening with the young Clark Kent on a date, the novel takes an entirely fresh approach to the emergence of his superpowers and the start of his newspaper career, following him from rural 1930s Kansas across America to Hollywood in its golden age and then to New York City. He meets a worldly Lois Lane and conniving political boss Lex Luthor, and begins his battles against criminal masterminds, mad scientists, and super villains inspired by fascists. This fun and fast-paced novel of thrilling invention, heroic escapes, ill-fitting costumes, and super-sized, coming-of-age angst is sure to appeal to devoted fans.