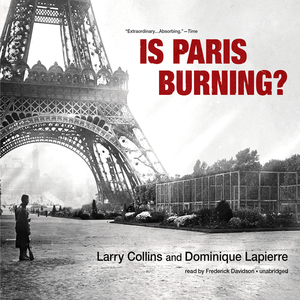 Audiobook Summary:"Is Paris burning?" is the question Hitler asked over and over as the French Second and American Fourth Divisions battered their way into the city. Few moments in history are as stirring as the Allied liberation of Paris. Yet few people are aware of how narrowly, and how miraculously, the city escaped Hitler's secret plan to reduce it to ashes. Is Paris Burning? reconstructs, in meticulous and riveting detail, the network of fateful events, day by day, moment by moment, that saved the City of Light. Best-selling authors and renowned journalists Larry Collins and Dominique Lapierre spent three years researching this stirring book. They drew on French Resistance radio messages, German military records, and secret correspondence between de Gaulle, Churchill, Roosevelt, and Eisenhower. They tracked down and interviewed countless people: soldiers, civilians, Allied generals, and even the Nazi commandant who helped Paris fight for her life. And they re-created the drama, the fervor, and the triumph that heralded one of the most dramatic events of our time.