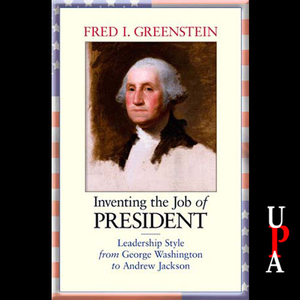 Written By: Fred I. Greenstein

Audiobook Summary: From George Washington's decision to buy time for the new nation by signing the less-than-ideal Jay Treaty with Great Britain in 1795 to George W. Bush's order to intervene militarily in Iraq in 2003, the matter of who is president of the United States is of the utmost importance. In this book, Fred Greenstein examines the leadership styles of the earliest presidents, men who served at a time when it was by no means certain that the American experiment in free government would succeed. In his groundbreaking book The Presidential Difference , Greenstein evaluated the personal strengths and weaknesses of the modern presidents since Franklin D. Roosevelt. Here, he takes us back to the very founding of the republic to apply the same yardsticks to the first seven presidents, from Washington to Andrew Jackson, giving his no-nonsense assessment of the qualities that did and did not serve them well in office. For each president, Greenstein provides a concise history of his life and presidency, and evaluates him in the areas of public communication, organizational capacity, political skill, policy vision, cognitive style, and emotional intelligence. Washington, for example, used his organizational prowess - honed as a military commander and plantation owner - to lead an orderly admininstration. In contrast, John Adams was erudite but emotionally volatile, and his presidency was an organizational disaster. Inventing the Job of President explains how these early presidents and their successors shaped the American presidency we know today and helped the new republic prosper despite profound challenges at home and abroad. The book is published by Princeton University Press.