I Fought with Custer: The Story of Sergeant Windolph (Unabridged) 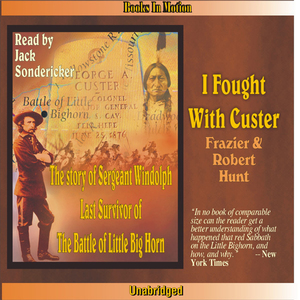 Audiobook Summary:Sergeant Charles Windolph was the last white survivor of the Battle of Little Big Horn when he told his story nearly 70 years later. A six-year veteran in the Seventh Cavalry, Windolph rode in the 1873 Yellowstone Expedition, and the 1874 Black Hills Expedition. He fought in Captain Benteen's troops on the fatal Sunday, and vividly recalls the battle that wiped out Custer's command. Equally vivid is the evidence marshaled by historians Frazier and Robert Hunt.