Hell Is Upon Us: D-Day in the Pacific - Saipan to Guam, June to August 1944 (Unabridged) 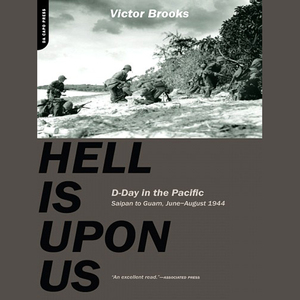 Audiobook Summary:June 14, 1944, just nine days after the D-Day invasion of Normandy, another mighty fleet steamed towards its own D-Day landing. A huge U.S. flotilla of 800 ships carrying 162,000 men was about to attempt to smash into the outer defenses of the Japanese Empire. Their target was the Marianas Island group, which included Saipan, home to an important Japanese base and a large population of Japanese civilians, and Guam, the first American territory captured in the aftermath of Pearl Harbor. During the next eight weeks, tens of thousands of men, hundreds of airplanes, and dozens of major warships were locked in mortal combat. When it was over, 60,000 Japanese ground troops and most of the carrier air power of the Imperial Navy were annihilated; Japan's leader, Tojo, was thrown out of office in disgrace; and the newly captured enemy airfields were being transformed into launching bases for the B-29s that would carry the conventional and, later, atomic bombs to Japan, turning the land of the Rising Sun into a charred cinder. After the U.S. victory in the Marianas campaign, the road to Tokyo was clearly in sight.