Hard Call: Great Decisions and the Extraordinary People Who Made Them 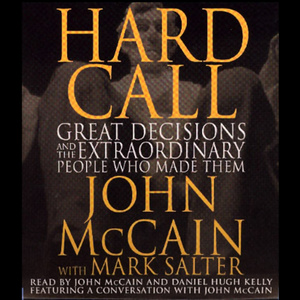 Audiobook Summary: There is a point in everybody's life at which a tough decision will have to be made - a hard call. For inspiration and direction, we can look to the remarkable individuals in John McCain and Mark Salter's book, which dramatically describes the anatomy of a great decision, including: Branch Rickey's decision to offer Jackie Robinson a contract to play for the Brooklyn Dodgers in the face of public opposition. Ellen Johnson-Sirleaf's decision to return to Liberia, after receiving an economics degree from Harvard University, to face the nightmare of a civil war, imprisonment, and the challenge of leadership. General Fred Weyand's decision to redeploy 15 of his battalions, despite resistance from senior American military commanders in Vietnam. Woven into these stories are McCain's own views on the process and art of decision-making, and stories about hard calls he's faced, and the ones we might all have to face in the future. Hard Call is an inspiring testament to grace under pressure by one of America's most admired political leaders.