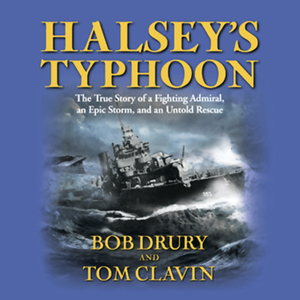 Audiobook Summary:December 1944, the Pacific Theater. General Douglas MacArthur has vowed to return to the Philippines. He will need the help of Admiral William "Bull" Halsey's Pacific Fleet. But at the height of the invasion, Halsey's ships are blindsided by a typhoon of unprecedented strength and scope. Battleships are tossed like toys, fighter planes are blown off carriers, destroyers are capsized, and hundreds of sailors are swept into the roiling, shark-infested sea. Only now, thanks to documents that have been declassified after 60 years and scores of firsthand accounts from survivors, can the story finally be told. Informed by years of rigorous research and narrated with the immediacy of an action movie, Halsey's Typhoon is an enthralling true tale of courage and survival against impossible odds and one of the finest untold World War II sagas of our time.