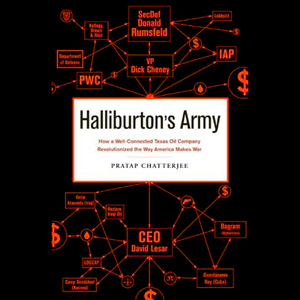 Audiobook Summary: Halliburtons Army is the first book to show, in shocking detail, how Halliburton really does business in Iraq and around the world. From its vital role as the logistical backbone of the U.S. occupation in Iraq to its role in covering up gang-rape amongst its personnel in Baghdad, Halliburtons Army is a devastating bestiary of corporate malfeasance and political cronyism. Pratap Chatterjeeone of the worlds leading authorities on corporate crime, fraud, and corruption shows how Halliburton won and then lost its contracts in Iraq, what Dick Cheney and Donald Rumsfeld did for it, and who the company paid off in the U.S. Congress. He brings us inside the Pentagon meetings, where Cheney and Rumsfeld made the decision to send Halliburton to Iraqas well as many other hot-spots, including Somalia, Yugoslavia, Uzbekistan, Afghanistan, Guantnamo Bay, and, most recently, New Orleans. He travels to Dubai, where Halliburton has recently moved its headquarters, and exposes the companys freewheeling ways: executives leading the high life, bribes, graft, skimming, offshore subsidiaries, and the whole arsenal of fraud. Finally, Chatterjee reveals the human costs of the privatization of American military affairs, which is sustained almost entirely by low-paid unskilled Third World workers who work in incredibly dangerous conditions without any labor protection. Halliburtons Army is a hair-raising expos of one of the worlds most lethal corporations, essential reading for anyone concerned about the nexus of private companies, government, and war.